TODAY’S GAME: Tonight, the Generals play the middle game of the 5-game series in Mobile with the series tied 1-1. Jackson is in the midst of playing 16 games in 15 days (5-3). On the current road trip to Mobile (1-1) and Chattanooga the Generals are 1-1. The Generals are 2 games back of Chattanooga in the SL North second half standings. 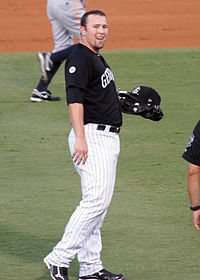 GENERALS RECAP: – Rich Poythress (pictured right) was 3-for-6 with 2 homers and 3 RBI Monday as Jackson split a double-header with Mobile at Hank Aaron Stadium. The Generals won game one, 4-2 and dropped game two 4-3. Jackson blasted 4 home runs total in the twin bill, two in each game. C Mike Zunino (1×4, HR, RBI) homered in game one along with Poythress. LH James Paxton (8-4) earned the win in game one, allowing 2 runs on 7 hits in 6.0 innings. Paxton struck out 6 and walked two. RH Logan Bawcom pitched a scoreless 7th inning and earned his 2nd Jackson save and 15th overall this season. In game two Poythress and Joe Dunigan (1×3, HR, RBI) homered. Dunigan now leads the league with 24 home runs this season. LH Anthony Fernandez (4-2) suffered the loss in game 2, allowing 4 runs, 3 earned on 6 hits in 4.1 innings. Fernandez walked 2 and struck out 5. SS Brad Miller was 2-for-3 in game two and combined to go 3-for-6 in the two games with an RBI and run scored.

VIRAL VIDEO: During last Wednesday’s perfect game pitched by Felix Hernandez in Seattle, a video of the Generals reaction during batting practice has gone viral. The video featuring Felix’s brother Moises has been aired on MLB.com, MLB Network, ESPN Sports Center and Yahoo Sports today. As of 2:30 this afternoon it had 95,360 views on YouTube.