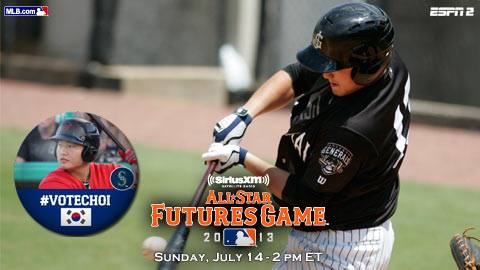 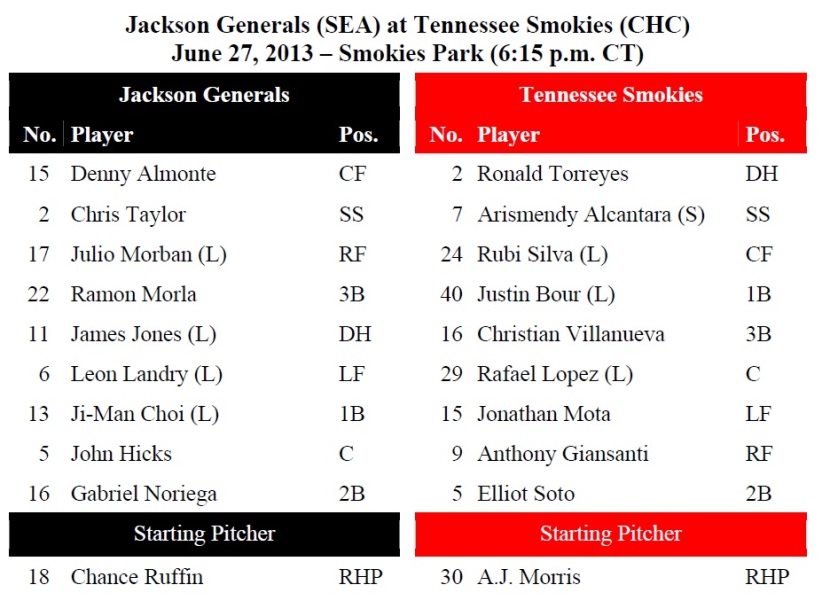 TODAY’S GAME: the Generals look to snap a 3-game losing streak tonight with game #4 of a 5-game road series at Tennessee against the Smokies (0-3)…this is the 14th of 20 meetings between the clubs (3-10) and 2nd series played at Smokies Park… 24-year-old Chance Ruffin makes his 14th career start and 14th of the season tonight. Ruffin is 0-0 with a 5.06 ERA in 2 starts this season against the Smokies.

GENERALS RECAP: The Generals lost their 3rd straight game Wednesday, falling 6-0 to Tennessee at Smokies Park. The shutout marked the 7th of the season for Jackson as Smokies’ starter Kyle Hendricks dominated the Generals for the 3rd time this season. Jackson’s best scoring threat was in the 7th inning as LF Leon Landry (2-3, 2 1B), 1B Ji-Man Choi (1-4, 1B), and 3B Steven Proscia (1-3, 1B) had back-to-back-to-back singles to load the bases, but the Generals were unable to score a run. Generals starter LH James Gillheeney (L, 5.1,8,6,6,1,2,1) suffered the loss. Relievers Stephen Kohlscheen and Nick Hill provided 2.2 innings of scoreless relief behind Gillheeney.

NEWS & NOTES: 30 of first 74 games have been 1-run games (10-20) which is the 2nd in all of minors…42 of 74 games have been decided by 2-or-fewer runs (13-29) and 7 have been extra-inning games (2-5)…In games decided by 3+ runs the Generals are 19-13.
• ALUMNI REPORT: 2010-2012 General INF Nick Franklin was 2×5 yesterday for Seattle against Pittsburgh and has now hit safely in 12 of his past 14 games, dating back to 6/11…is now batting .316 (18×57) with 6 R, 4 2B, 2 HR, 10 RBI, and 4 BB during that span
• SEATTLE GENERALS:…there are currently 5 players on the Mariners active roster that were members of the 2012 Jackson Generals (INF Nick Franklin, C Jesus Sucre (15-day DL), C Mike Zunino, RHP Carter Capps and RHP Yoervis Medina). In total, eight 2012 Generals have made their MLB debuts and two 2013 Generals. (C Brandon Bantz, RHP Hector Noesi)
• #VOTE CHOI: For the first time, fans will determine the final player on both the U.S. and World Team rosters by casting their votes in the Futures Finalists ballot, available exclusively on MLB.com/futuresfinalists. Generals 1B Ji-Man Choi, a native of South Korea is one of the finalist for the World roster.
• MILLER, WALKER TO THE FUTURES GAME: 2013 Generals Taijuan Walker and Brad Miller were selected to the Futures Game U.S. squad on Wednesday. This is the 1st selection for Miller and 2nd selection for Walker.
• YOUNG GUN: 21-year-old OF Julio Morban is the 5th youngest player in the Southern League. Morban currently is 2nd in the league with a .311 batting average is 4th in the league with a .495 slugging percentage.
• NEW FRESH PRINCE OF TACOMA: RH Taijuan Walker was promoted to Tacoma Friday and tossed 6 shutout innings Tuesday against Fresno in his Tacoma debut. In Walker’s final Jackson start, he struck out a career-high 12 last Thursday against Mobile. In his last 5 Jackson starts, struck out 39 and walked 5 in 32 2/3 innings, all while allowing opponents to hit just .191 (21-for-110). Hemade 39 starts for the Generals in 2 seasons complete with rates of 9.1 strikeouts and 3.4 walks per nine innings.
• MORBAN SL HITTER OF THE WEEK: The Southern League announced Monday that Generals outfielder Julio Morban was  named the League’s Hitter of the Week. Morban batted .400 (10×25), with 3 doubles, a home run, 9 RBI and 6 runs scored during the week and opening series of the 2nd half against Mobile. Morban homered, doubled twice and posted a career high 5 RBI in Saturday’s 10-5 win over the BayBears at The Ballpark at Jackson. It’s the first hitter of the week for a General since Brad Miller the first week of the season.
• THE THREE CAVALIERS: With the addition of INF Chris Taylor at the start the 2nd half, the Generals current roster features 3 former Virginia Cavaliers in Taylor INF Steven Proscia and C John Hicks. AAA Tacoma’s roster features 2 former UVA alums in pitcher’s Andrew Carraway and Danny Hultzen. Both were 2012 Generals.
• NORIEGA’S SPORTS CENTER LOVE: The 6-3 triple play started by Gabriel Noriega to end game one of Monday night’s doublheader against Chattanooga was Monday night’s #3 play on ESPN Sports Center’s top 10 plays.
• WE GOTCHA!!…Jackson catchers lead the SL catching 50.0% of base stealers (36 CS, 72 Att). The next closest is Mobile which is throwing out 32.5% of base runners.