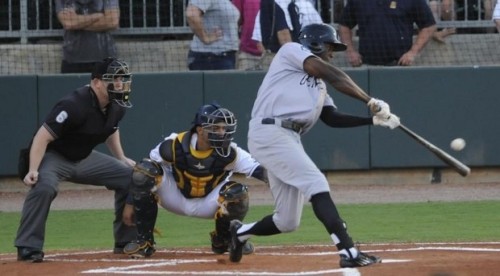 James Jones was 1-for-4 in last night’s Southern League All-Star Game in jacksonville.

TODAY’S GAME: the Generals continue their 10-game homestand (0-5) tonight with game #1 of a 5-game series with the Mississippi Braves at The Ballpark in Jackson…this is the M-Braves’ first and only visit to Jackson this season. The Generals dropped 4 of 5 from the Braves at Trustmark Park, April 15-19…22-year-old LHP Anthony Fernandez makes his 14th start of the year, 90th of his career and 27th for the Generals tonight…this is Anthony’s 1st start of the season vs. MIS and in 2 career starts vs MIS he is 1-0 with a 3.00 ERA.

DID YOU KNOW?: that despite Jackson’s 5-8 record in July, Generals’ pitching ranks 3rd in the Southern League this month with a 2.54 ERA. Generals pitching leads the league so far in July, holding opponents to just a .193 average.

ALL-STAR GAME(S) RECAP: RF James Jones was 1×4 with a 2B for the North Division Wednesday night and had the only hit for his team during the North’s 6-0 loss to the South Division in Jacksonville. LH Roenis Elias pitched a scorless 4th inning, striking out 2 batters. 1B Ji-Man Choi was 0x2 after taking over in the 6th inning Sunday during the Futures Game in New York for the World team. Former General RH Taijuan Walker pitched a scoreless 2nd inning for the U.S. squad as the U.S. defeated the World 4-2 in the 15th Sirius XM Futures Game.

GENERALS RECAP: Sunday’s game between the Generals and Smokies was cancelled because of rain and unplayable field conditions. The game will not be made up due to the teams not meeting again this season. The Smokies won all 6 games during the series, including the resumption of the game from June 28 and finished the season series with a 16-3 advantage. The Smokies won the last 8 in a row over Jackson.

NEWS & NOTES: 35 of first 90 games have been 1-run games (13-22) which is the 5th in all of minors…49 of 90 games have been decided by 2-or-fewer runs (17-32) and 10 have been extra-inning games (3-7)…In games decided by 3+ runs the Generals are 22-18.
• ALUMNI REPORT: 2012 General RHP Logan Bawcom has tossed 8.1 scoreless innings over his last 6 relieaf appearances for Tacoma, including recording a save in 5 of those outings. He currently leads all Mariners farmhands with 16 saves.
• SEATTLE GENERALS:…there are currently (7) players on the Seattle Mariners active roster that were members of the 2012 Jackson Generals (INF Nick Franklin, INF Brad Miller C Jesus Sucre (15-day DL), C Mike Zunino and RHP Yoervis Medina, LHP Bobby LaFromboise, RHP Stephen Pryor (60-day DL). In total, (9) 2012 Generals have made their MLB debuts and (3) 2013 Generals. (C Brandon Bantz, RHP Hector Noesi, INF Brad Miller).
• TAYLOR ADDING UP THE HITS: SS Chris Taylor recorded his 100th hit of the season on June 30 vs. Birmingham. He was the first Mariners farmhand to record at least 100 hits. He currently has 113 hits which ranks T-12th in all of Minor League Baseball.
• CLOSING TIME: After allowing 5 runs over his first 6 appearances of the season, RH Carson Smith has allowed only 4 earned runs over his last 24 relief appearances. During this stretch he is 0-1 with 7 saves and a 1.50 ERA (4 ER, 26.0 IP). Since April 22, Smith has lowered his ERA from 8.44 to 2.59. Smith has struck out at least 1 batter in 27 of 30 games, including recording 15 strikeouts over his last 8 appearances.
• ALL ABOUT THE JI-MAN: Quietly, 1B Ji-Man Choi is having one of the best seasons in the Mariners farm system. Overall this season in A+ and AA he is batting .301 (84×279) with 13 home runs and 57 RBI. He ranks 7th in AVG, 4th in HR’s and 4th in RBI in the organization.
• THE THREE CAVALIERS: With the addition of INF Chris Taylor at the start the 2nd half, the Generals current roster features 3 former Virginia Cavaliers in Taylor INF Steven Proscia and C John Hicks. AAA Tacoma’s roster features 2 former UVA alums in pitcher’s Andrew Carraway and Danny Hultzen. Both were 2012 Generals.
• NORIEGA’S SPORTS CENTER LOVE: The 6-3 triple play started by Gabriel Noriega to end game one of a doublheader on June 10th against Chattanooga was Monday night’s #3 play on ESPN Sports Center’s top 10 plays.
• WE GOTCHA!!...Jackson catchers lead the SL catching 53.8% of base stealers (49 CS, 91 Att). The next closest is Birmingham which is throwing out 35.6% of base runners.
• BASEBALL AMERICA PROSPECTS: The Generals roster features 8 of the Mariners Top 30 prospects, according to Baseball America. Those include: RHP Carson Smith (16), OF Leon Landry (17), INF Jack Marder (20), C John Hicks (21), OF, OF Julio Morban (23), INF Chris Taylor (28), INF Ramon Morla (29) and LHP Anthony Fernandez (30).