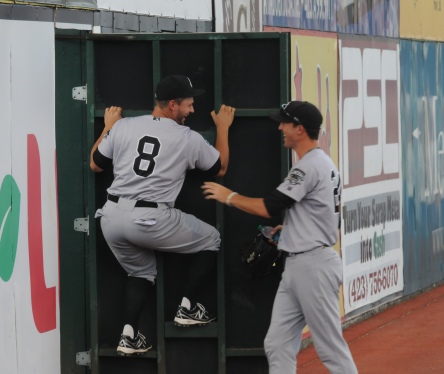 Forrest Snow re-joined the Generals yesterday at game time. He was greeted in a strange way in the bullpen by catcher Mike Dowd. (Tim Evearitt) 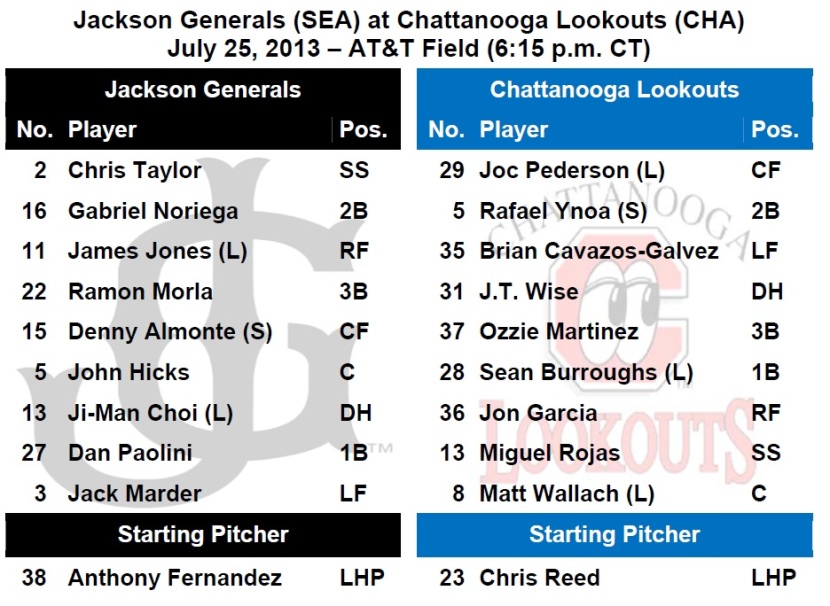 TODAY’S GAME: the Generals continue a 5-game road series tonight with game #3 at AT&T Field against the Chattanooga Lookouts…the Generals are 7-5 against the Lookouts this season and 5-2 at AT&T Field…23-year-old Anthony Fernandez makes his 15th start of the year, 91st of his career and 28th for the Generals tonight…In 3 starts in July, Fernandez is 0-2 with a 2.00 ERA (4ER/18.0) and opponents are hitting just .150 against him.

• KEN GRIFFEY JR. AND BRAD MILLER: Opening day Jackson shortstop Brad Miller was named the American League Player of the Week on Monday. In 3 games vs. the Astros, Miller hit .385 (5×13) with 4 runs scored, 2 home runs, 7 RBI and a 1.346 OPS. He recorded 2 home runs and a career-high 5 RBI Friday vs. the Astros He is the first Mariners rookie to earn the honor since Ken Griffey Jr. in 1989

• THE HOME STRETCH: The Generals are in the midst of playing 42 games in 42 days to close out the regular season. 27 of those games will come on the road and 15 will be at The Ballpark in Jackson.

• WELCOME TO DOUBLE-A MR. LEONE: Generals reliever Dominic Leone is the 3rd member of the 2012 draft class to reach Double-A this season (Zunino, Taylor). The 21-year-old out of Clemson has tossed 4.0 hitless innings with 5 strikeouts in his first 3 Jackson outings, including his first save on Wednesday.