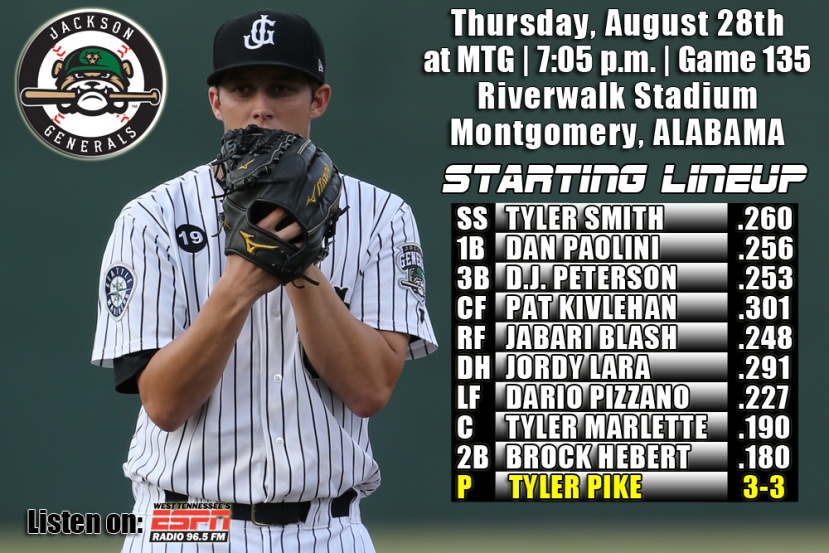 TODAY’S GAME:
• The Generals begin their final road trip and series of the season tonight with game 1 of a 5-game series at Montgomery…Jackson dropped 3 of 5 from Chattanooga in previous series.
• The game can be heard on 96.5 ESPN, online at jacksongeneralsbaseball.com or TuneIn Radio.

THE 100 RBI CLUB:
• Of the 7 minor league players this season to record at least 100 RBI this, the Mariners currently have 3 players on the list. Seattle is the only franchise with at least 2 players with at least 100 RBI this season and have 4 players that rank in the top 11. INF D.J. Peterson currently ranks 3rd in the minor league with 104 RBI, while INF/OF Patrick Kivlehan and INF Jordy Lara are each T4th this season. Hi-A High Desert OF Jabari Henry is currently T11th in 2014 with 95 RBI.

SIX 2014 GENERALS HEADED TO THE AFL:
• The Mariners, affiliated in 2014 with the Surprise Saguaros are sending current General pitchers RH Matt Brazis and RH Stephen Landazuri along with position players D.J. Peterson and Patrick Kivlehan to the AFL.
• Current High Desert pitcher Matt Anderson and Tacoma catcher John Hicks will play for Surprise. Jackson trainer
• B.J. Downie will serve as athletic trainer for the Saguaros, who will partner with the the Red Sox, Reds, Padres and Rangers in 2014.

BIG SEASON FOR PETERSON IN 2014:
• The Mariners 1st round pick, 12th overall in 2013 ranks 3rd among all minor league players wth 104 RBI combined between High Deset and Jackson. He also is T10th in the minor leagues with 28 home runs.

DID YOU KNOW?
• YOU (MAY) ALREADY KNOW that the Generals concluded their home schedule Tuesday and drew 135,248 fans, but DID YOU KNOW? that it is the highest cumulative attendance since drawing 140,445 in 2008.